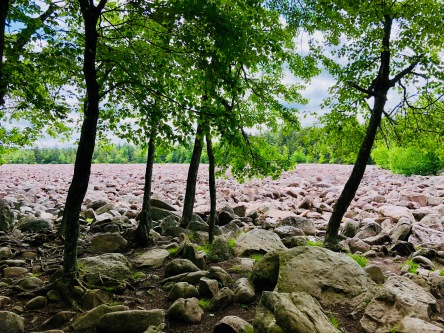 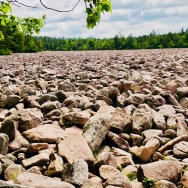 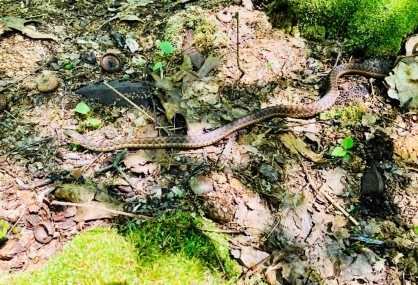 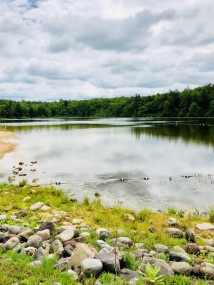 In a remote area of Eastern Pennsylvania in the Appalachian Mountains there are 16 acres of rock formations dating back to saber-toothed cats from the last ice age. The boulders that make up the huge field some of which measure 25 feet long, appear upon arrival to be a dry lake but it is so much more. It is also not a glacial deposit, but rather according to geologists the result of freeze-thaw, frost and gelifluction from over 20,000 years ago. However, the most extensive ice sheet to cover the area containing this boulder field occurred prior to 900,000 years ago. So the freeze thaw made smaller boulders from bedrock. During the ice age the permafrost of mud and sand moved the boulders and then moved small rocks to the bottom and the larger boulders to the top.

The magnificent Boulder Field was designated a National Natural Landmark in 1967 and remains mostly as I remember it from my first visit in 1988. There are a few more trees and vegetation and perhaps in many more years the forest will again claim the area, but not in my lifetime.

Upon arrival at Boulder field there is a strong temptation to run out onto the boulders only to realize the spaces between them makes it difficult, and they do move when people hop around. Most people never make it out more than ten feet from the forest but many locals in fact seem to negotiate a walk right down the middle without effort! My photographs use examples of the two primary rock formations. The first found in Boulder Field is Quartz Conglomerate. The other prominent one is Red Sandstone have various shades of red caused by iron oxide rust.

Boulder Field is located in Hickory Run State Park in Pennsylvania. The area also includes Sand Spring Lake and Hawk Falls and some of the best hiking in the Poconos.