In 1856 John Taylor of NJ developed a new sandwich food which he called “Taylor’s Prepared Ham.” It is a tasty if not amazingly healthy breakfast meat by today’s standards. Taylor Ham was a hit and seen in many homes for breakfast as well as for lunch with eggs and cheese. After many years of great success and many sales, other competitors started to duplicate or imitate his process making an equally delicious treat. This continued until food labeling regulations required that it must be designated and properly labelled as a pork roll product similar to the new competitors. The Food and Drug act of 1906 created the requirements but litigation in 1910 ruled that words like pork roll could not be trademarked, so Taylor obeyed the law. 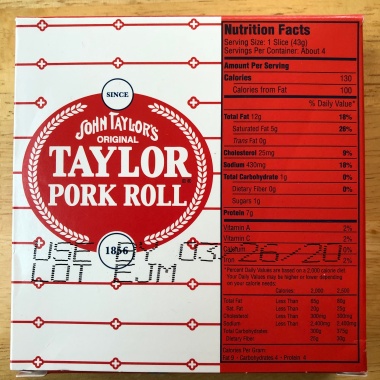 My dad used to put it on the grill in an attempt to diminish the fat content. The added grilled flavor has kept my interest focused on this Holiday breakfast treat. In 2016, NJ Assemblyman Tim Eustace presented an act making ‘Taylor Ham and Egg’ the NJ State Sandwich. President Obama got into the mix at a Rutgers University speech, saying he would settle the Taylor Ham or pork roll debate in his final year in office then smiled and said no way… not even the president would not enter this controversy! LOL

Social media occasionally puts up the question whether it is pork roll or Taylor Ham — and now I am going to answer that as a Northern New Jersey gal, which is where it all began. It is colloquially called Taylor Ham in my home and hometown because after almost 175 years of tradition and respect for the founder.  Keep in mind much the same way we all say may I have a coke, when we enter a NJ diner, that colloquialism exists because Coke was the first, Xerox was the first and many times we say xerox it to mean run a copy and Taylor Ham was most definitely first. One final note I eat all brands of pork roll!